The Landowner And His Wife CH 2

This is an unofficial translation and no permission has been obtained from the author/ official publisher.

It may be taken down if the author/official publisher requests.

This is a fan work and the interpretation represents only the translator’s personal views without any input from the author.

No permission has been granted to use, publish, upload and/or copy this translation to any other site except for Second Life Translations.

The Wang woman had just left when Ma shi who was leaning on her door post, eating melon seeds and spectating, finally spoke up coolly.

“When one’s children are disappointing, that’s when you’ve to deal with many troubles.

At least there’s a good ability to argue, see these things happening one by one.”

He shi turned to look at her.

“Saozi1, what are you saying”

Moving outside, she said loudly “I’m just saying, that when one’s children are disappointing, they stir up trouble all day long! What, am I not allowed to say it Otherwise, why doesn’t Aunt Wang trouble others, instead always coming to find trouble with us”

He shi could be impolite to the Wang woman because she wasn’t part of the family, but towards her own dasao2, she could not be too rude.

Villagers placed a lot of importance on hierarchy.

So when she heard Ma shi’s mocking, she went pale with anger, but, with her children watching, could not answer back.

The following parts of the text will be scrambled to prevent theft from aggregators and unauthorized epub making.

Please support our translators by reading on secondlifetranslations (dot) com.

If you are currently on the site and and you are seeing this, please clear your cache.

On entering the room, Liu Xu’er was scooped up by Liu Shu onto the kang. She looked toward He shi and said, “Mum! Do you think sanshen will fake illness again!”

He shi immediately skewered her with a glance, “Aren’t you sharp! Instead of growing physically, all your attention is focussed on growing more calculating! You’re not even the height of a pair of chopsticks, why are you worrying about these things”

Liu Xu’er immediately straightened her back, “Isn’t it all because sanshen always pretends to be ill so that she can be lazy Dashenzi also completely refuses to be shortchanged, and so all of sanshen’s work always falls on you!”

Liu Lin chimed in agreement, “Isn’t that so! During the busy farming season, she says she’s ill.

Even sanshu hasn’t done any work for quite a few days!”

Even though He shi knew that what her children said was true, she still couldn’t allow them to be cheeky, and talk badly of their elders behind their back.

With a solemn face, she sternly warned them, “You cannot talk about matters concerning your elders, understand What is filial piety Our ancestors have passed down sayings – those who are not filial cannot, in their lifetime, walk proudly upright.

Everyone looks down on those unfilial.

All of you cannot become that person, understand!”

Liu Xu’er still wanted to defend herself, but on seeing He shi’s glare, she could only meekly bow her head alongside Liu Lin.

Liu Shu kept silent throughout the conversation, but seeing his siblings look so deflated, he quickly diverted the topic.

“Mum, when dad gets back, maybe we can see what work he managed to find.

If it’s something young children can do, I will also go! Even if I can only earn one wen7, that’s still money! We can get Liu Lin to look after the little ones. 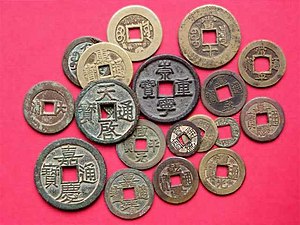 On hearing this, He shi shook her head.

“You’re only seven, what can you do It’s better to stay at home, rest for this half a month and then we can tidy up the place.” Saying this, her mind wandered and she absently said to herself, “There’s still shoes and pants that need to be made soon, their toes and legs are all sticking out….”

Liu Lin laughed, “Mum, are you asking gege to make shoes and pants”

He shi also let out a small chuckle.

Raising her hand to tap on Liu Lin’s forehead, she said, “Trust you to say something silly!” Saying this, she left the room.

Liu Lin and Liu Shu also climbed on top of the kang. Liu Shu tilted his head and looked at the still sleeping Liu Sen.

“Dage, have you gone to see Shi Cheng’s family’s milk cow” Liu Xu’er was still hung up over that matter.

“Do you know how much silver a milk cow costs”

It definitely won’t be cheap.” Liu Shu shook his head.

A milk cow, even in modern times, should cost at least seven, eight, perhaps even more than 10 000 yuan In this era, it should be at least….

How much silver it would cost, Liu Xu’er didn’t know, because she still did not know how to calculate what the equivalent amount of silver would be.

Truth be told, the just five-year-old Liu Xu’er had never seen what a silver ingot looked like, or even if it looked different from what she had previously seen on TV….

The Liu family was an extremely poor household.

Although yeye and nainai were diligent and hardworking, there were still a lot of people in the family.

With four sons and three daughters, to be able to bring all of them up was already difficult, to say nothing of savings.

Ever since the Liu family’s sons started to take wives, the family became even poorer.

Practically, for every son that got married, they also needed to marry off a daughter in order to keep the family afloat.

But it was precisely because the family was poor, the betrothal gifts they could offer were limited, and therefore, the daughters-in-law that married in were all, in some aspect, dissatisfactory.

The eldest, Liu Chang Qi married Ma shi – she was greedy, and liked to fuss about small matters as well as having a tendency to be small-minded and cunning.

When she was unmarried, people at her natal home village all said that this maiden didn’t waste time growing physically, but instead only grew her cunningness! In everything, she refused to lose! Village people dislike this type of extremely calculating behavior, and so when Ma shi was unmarried, it was difficult for her to find a match.

In the end, she could only settle for the extremely poor Liu family.

When she was in her natal home, it spread that she had a bad temper, and was too easily irritable.

Liu Xu’er could not help but laugh mischievously to hear this; she was actually rather satisfied with the mother she had in this lifetime.

If her mother wasn’t fierce, how could she protect herself and her siblings Her father, Liu Chang Geng was the second son, not the eldest, nor the youngest.

As the second son, he was in the middle and was the most likely to lose out.

If mum wasn’t fierce, wouldn’t there be even more that the family couldn’t get

However, fighting for resources in this family was a secondary concern; after all, there weren’t any good resources the family had to fight over.

But outside the family, if someone didn’t have a bit of a temper, all those shrewish women and those women who liked to make trouble, would treat you as a soft target, free for the picking.

Who could take that Like that neighbor, the Wang woman, who just came.

But the Third, Liu Chang Gui’s wife –  her reputation preceded her, and it was one of exceptional laziness, to a degree which would make anyone’s hair stand on end to see it.

And sure enough, she lived up to her reputation.

She had  been married for a full four months, and had maybe prepared five days worth of meals.

All day, she would complain of aches and pains.

And what’s worse, even her husband had now adopted her lazy ways.

The first half of the month was the busy season to reap buckwheat.

Everyone in the family was so busy that they went down a size.

Even Liu Xu’er, who was following along to pick up any dropped ears of buckwheat, got burnt into a little ball of charcoal.

Only Third’s wife hid in the house and refused to come out.

Liu Gao shi had to ignore her own embarrassment to call for her.

Dragging her from the kang, scolding and threatening her all the way out to the fields to help for one day.

The next day, she would be unable to get out of bed, complaining that she had pulled a muscle in her waist, or twisted an ankle and be unable to move, insisting that the able-bodied Liu Chang Gui accompany her for three days.

Seeing her third daughter-in-law be lazy to this extent, Liu Gao shi’s heart was chilled.

Honestly speaking, which family in the village doesn’t want to have a capable and harmonious daughter-in-law Liu Gao shi definitely wished that all her daughters- in-law were good ones, able to work outside capably and willingly, without stirring up trouble, while maintaining a good temper at home, getting along well with her sisters-in-law.

But the family was poor, and while unmarried girls who have a good reputation wouldn’t require a higher amount of betrothal gifts than others, those with poorer reputations in their natal villages would definitely ask for less in terms of betrothal.

Since the family was poor, they had no choice but to look at girls who had a slightly poorer, but still not too problematic reputation.

The good thing was, although First and Second’s wives had their own bad habits, when it came to work, both were very capable at working.

Especially Second’s wife, apart from having a somewhat quick temper, she could be considered a good wife.

Hardworking, and very filial toward her parents-in-law.

Among the sisters-in-law, she was the one who tolerated the most, and tended to be taken advantage of.

Her temper would only explode if you crossed the bottom line – her children.

First’s wife, although overly calculating, was still a good worker.

After all, she grew up in the village, and everyone had to pitch in even a little.

Liu Xu’er was still on the kang wondering, when she heard footsteps walk past outside the room.

She immediately leaned out the window.

Sure enough, she saw nainai headed for sanshu and sanshen’s room.

Liu Lin squeezed in next to her, lowering his voice he asked, “Nainai went to call sanshen”

Liu Xu’er nodded her head, “Yup, but who knows if she will get up or not”

Liu Gao shi went to Third’s window and called, “Third’s wife, aren’t you getting up Today’s your turn to cook!”

After a long while, a weak voice drifted out from the house, “Yes, I’m coming….” Her voice trembled on the last note, as if she was so ill she was on the verge of death.

Although she had just agreed verbally, this had happened before.

When asked to do work, she would always agree.

She would never say that she was unwilling to work – it was just that she couldn’t move her body! And then after a while, she would ask her man to go to her mother-in-law to beg and wheedle and wear her down.

Raising her hand to knock on the window, she said, “Then quickly come out! Hurry, I’m here waiting!”