Meanwhile, Delise walked with a spring in her step after she finally left the Imperial Palace.

She was overjoyed to be free again.

Although the tower had windows from which she could see the sky up close, the sky looked much more beautiful when seen from outside.

Moreover, on the way out of the Imperial Palace, she ran into Marquis Farang, who handed a document to her.

This document gave her indescribable pleasure.

As she walked, she heard angry voices on the main street.

It sounded like a there was a violent commotion.

‘Is it a gang fight’

Delise hesitated and cocked her head as she thought about taking another route.

“What Empress She tried to flee after her lies were discovered.

How can she call herself the Empress!”

“Look at her filthy face!”

“The so-called hope of the commoners turned out to be a con artist!”

When Delise listened carefully, she could make out some of the shouts.

As soon as she heard the word ‘Empress’, two faces came to her mind.

The commotion moved closer and closer in her direction.

Two knights had a person forcibly held by the arms, while the commoners surrounded them.

It seemed that their curses and merciless accusations were directed against that person.

When the curious procession came close, Delise saw one of the Empresses she had in mind.

She was the second Empress.

The Empress that Delise had once loved and admired…

Incredibly, amid the crowd, Rashta’s eyes fell immediately on Delise.

Rashta wasn’t handcuffed, but she couldn’t move freely because the knights held her arms tightly.

Even if she managed to get rid of the knights, she was surrounded by commoners who seemed eager to attack her.

She had no escape.

She stared at Delise with pursed lips.

Delise approached Rashta step by step, but it was difficult in the large crowd of people surrounding the Empress.

When Delise felt close enough, she grinned broadly and stuck out her tongue.

Her tongue had been cut in half.

It was barely attached and looked as if it would detach at any moment.

Sovieshu, who was in the office, raised an eyebrow at Count Pirnu’s report.

“Was she hurt by the people”

Before Count Pirnu could reply, Sovieshu’s thoughts turned in another direction.

She must have been surprised that the commoners, who always greeted her with cheers and adoration, insulted and cursed her.”

“It seems there was another reason.”

Count Pirnu recalled what Rashta murmured several times while unconscious, ‘Stick it on.

You have to stick it on.

No, don’t rip it off.’ It was clear that she had seen something horrible.

When Sovieshu learned that Rashta had ordered Delise’s tongue cut out, he quickly sent someone to stop it.

But half of Delise’s tongue had already been cut out.

He even asked Evely to try to heal her once he discovered that she had healing magic, but Evely couldn’t undo the action.

“Every time Rashta seems to regain consciousness, she calls out to Your Majesty.

What are you going to do”

Sovieshu spoke firmly, “Forget about it.” He didn’t want to see Rashta’s face.

Sovieshu pitied Rashta even when she smiled.

Due to her pitiful life since birth, whenever she pleaded with him in tears, Sovieshu felt an inexplicable pressure in his chest.

Only when he didn’t see her face or was with a group of people could he assess her crimes coldly.

“Just report back to me when she recovers.”

But in less than a minute, Sovieshu changed his mind.

‘I’ll have to talk to her at some point anyway.’

There was still a little time left before the trial started, so it would be better to talk now.

Rashta’s room was decorated with a harmonious combination of soft cream, warm purple and splendid gold.

It looked somewhere out of a fairy-tale.

Any child would believe that a prince or princess lived there, happily ever after.

There was a time when this place was full of happiness and laughter, but now it was darker than ever.

There was no happily ever after.

The room wasn’t cold, but it wasn’t warm either.

Inside, Rashta was surrounded by the palace doctor, some knights and maids, all devoid of sympathy for the Empress.

When Sovieshu entered, everyone present greeted him politely.

“She has minor bruises, but otherwise she’s fine.

Sovieshu waved his hand for everyone to leave the room.

Once the knights, the maids and the palace doctor had left, Sovieshu said coldly as he looked at Rashta,

“Stop pretending to be asleep.”

She sat up in bed and looked at Sovieshu with resentment.

Tears slowly gathered in her eyes. 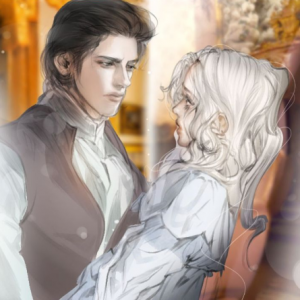 “Running away was not a good decision.”

“It was you who cornered me so that I had no choice but to run away.”

“Me It was your decision, Rashta.”

“I was locked in here, so I didn’t know what was going on outside.

Even the maids didn’t tell me.

Rashta paused as she spoke, startled, and asked Sovieshu in a shaky voice.

“You lie! That explains it all!”

“You always blame others.

You should at least take responsibility for your actions, Rashta.”

“What about Your Majesty Don’t you blame me, too”

“I have seen Your Majesty cry and repeatedly call out to Navier.

Your Majesty now wants to make Rashta pay for your decision to divorce that woman, right”